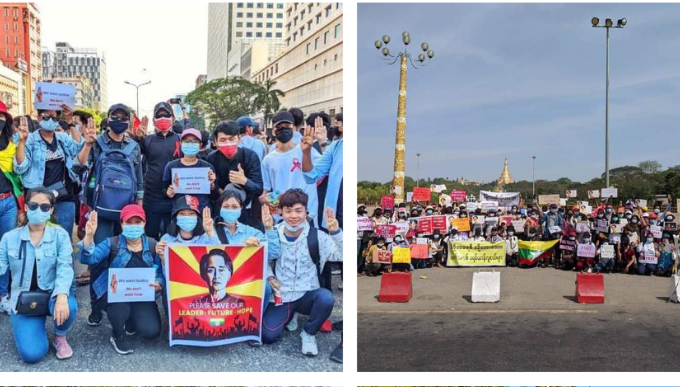 While the situation was expected to normalize on February 1 with the long-awaited end of the confinement, the coup was a very violent shock – especially for young people who were beginning to see their country democratize and develop even further after the success November 2020 election.

What is the situation today?

We try in this letter to give you some news and if you want a concrete way to support them.

A shock that mobilizes young people of generation Z

Almost 3 weeks ago, early in the morning of Monday February 1, the Burmese army arrested the leaders of the ruling party (National League of Democracy, NLD), including President U Win Myint and State Councilor Aung San Suu Kyi (Mother Suu for Burmese). The army then announced a state of emergency and stopped dead a democratic process in the process of stabilizing. The military has not ceased to harden its tone since their coup and have since developed the repressive arsenal. More than 450 people – politicians, doctors, activists, students, strikers – have been detained. Nevertheless young Burmese, especially “Generation Z” are on the front line against the junta.

Too young to have experienced previous military regimes and the bloody repressions of 1988 and 2007, they grew up in the heady atmosphere of the democratic process that began just ten years ago, after the ruling junta in 2011 to its “self-dissolution” – thus ending 49 years of dictatorship. The February 1 coup d’etat is the image of the great step backwards symbolized by this military takeover. “Gen Z” young people are not ready to digest it or accept it.

Popular resistance has taken various forms, some of which are more difficult to silence than others: the pounding of pots and pans in many parts of Myanmar at 8 a.m. every night, reminiscent of a tradition Buddhist to cast out demons. The Civil Desobedience Movement is gaining momentum. Civil servants, doctors and a large part of the population stopped working. The country is at a standstill. Calls for civil disobedience continued to be launched in Burma despite the junta’s tougher crackdown.

But this fight is difficult and creates divisions and dramas within their families in a society which still devotes a great respect even a total obedience to its ancestors. It is a difficult heartbreak for many. “I feel all alone in my struggle ,” says J. and is cut off from the rest of her family who are holed up in places protected by the military.

The singular profile of these unarmed “insurgents” who constitute the spearhead of an unprecedented movement, the embodiment of the global rejection of the population facing a hated army, is drawn around three words: determination, courage and fear.

The determination
Everyone says it, repeats it and chants it in a kind of stubborn mantra: “We won’t give in, if we fail now, it’s over: today’s struggle is the guarantee of our future. We are protesting today for a better tomorrow.”

Courage
As the assertion, a little bravado, a young woman: “If necessary, I am ready to die. When one remembers that the demonstrations of 1988 caused 3,000 deaths, this statement may not, however, be an empty promise.

The fear
Everyone recognizes this: “We fear violent repression, we know that the army can shoot. Frankly, I realize that tomorrow I may be dead. They feel less alone than the mythical heroes of “Generation 88”: and this is where we can help and support. “Thirty-three years ago, our predecessors were fighting in a Burma almost cut off from the world. The abuses of the soldiers could not be passed on immediately, there was no Internet or cell phones. The students had limited knowledge of the outside world. Today I am connected through our movement with people from all over Asia but also from Europe and the rest of the world. It gives us strength even if we feel isolated. Their expressions of affection, their interest and their support count and keep us going.”“.