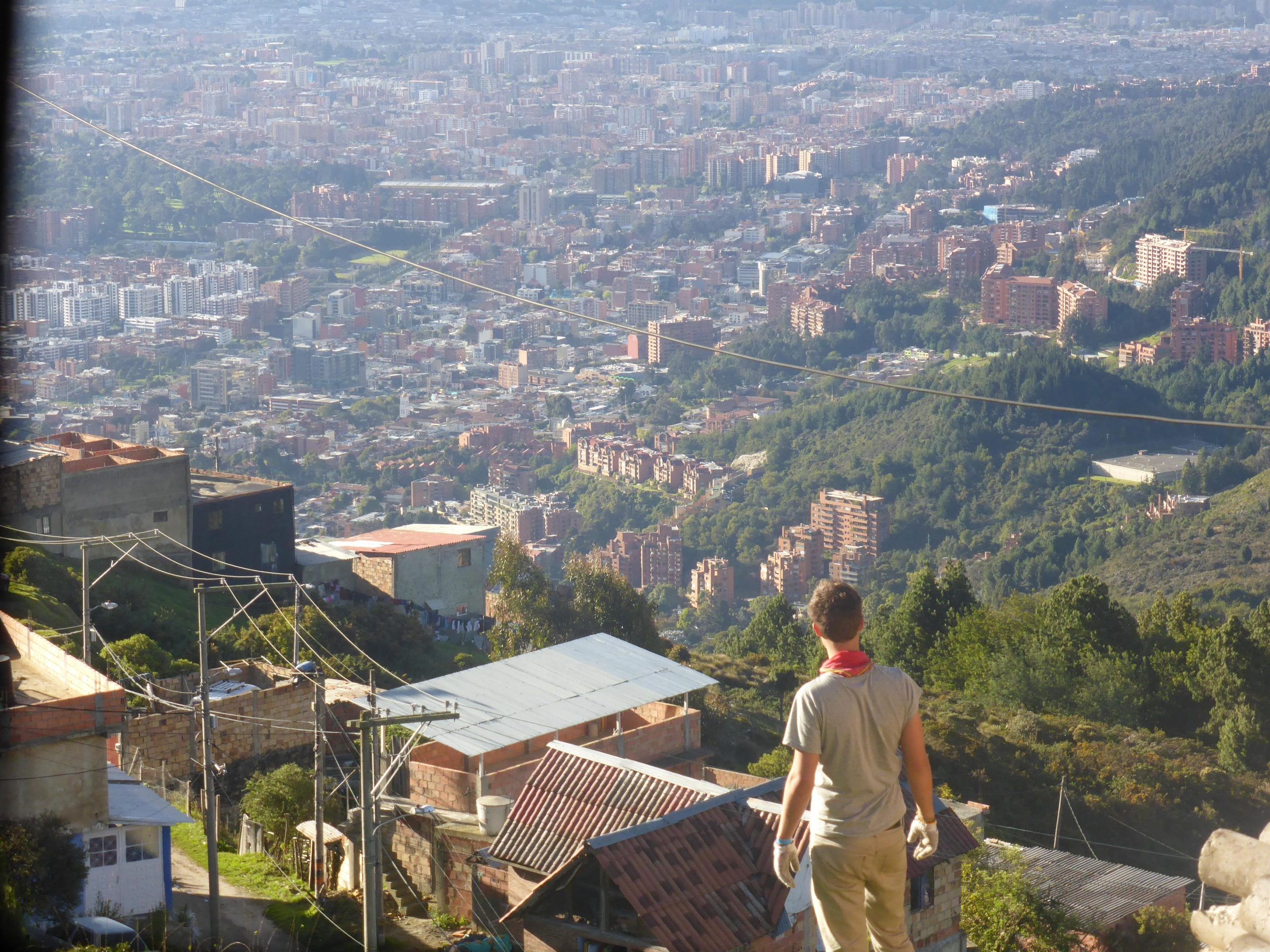 After Togo , the first phase of the Fondacio Congress will begin tomorrow, April 2, 2022, in Colombia. It will open with a day of collective reflection around integral ecology and youth. Fondacio began working in Latin America in the early 1980s. School support, construction of decent housing and promotion of reading are some of the projects carried out by Fondacio in Latin America.

Our history in Latin America

Fondacio was born in Poitiers (western France), in 1974, in the spirit of the Second Vatican Council. Three years later, in 1977, Domingo Santa Maria, a Chilean businessman committed to the Charismatic Renewal, met the nascent community in Europe. This led to a first evangelistic weekend organized by Fondacio in Santiago de Chile, in July 1980. A year later, the Fondacio community was created in the Latin American country.

In 1988-1990, land was purchased in Conchalí (now Huechuraba), north of Santiago. A center was built as a “bridge” between the people of the slums (the “pobladores”) and the people of the wealthy neighborhoods, with responsibilities in the economic or political world. The center, Los Almendros, allows the meeting of different and distant socio-economic realities, which can be in communion and unity in the sharing of common activities and evangelization. In the years that followed, it became an incubation platform for many social and environmental projects.

Then, in 1997, Colombian couples, trained in Chile, planted the seeds for the creation of a Fondacio community in Bogotá . In 2010, Fondacio Colombia co-created Oasis , a development and solidarity program, with the Colegio Emilio Valenzuela Foundation . Oasis is based in a slum on the heights of Bogotá, in the northeast territory of San Luis. This slum dates back to the 1960s, when the Colombian civil war caused many rural populations to flee. San Luis lack of investment in all structures: education, health, roads, property, etc.

Today, Oasis is active in fields as diverse as children’s education , environmental protection and home improvement . The local population can access and get involved in all the projects. Oasis welcomes teenagers, when they are not at school, as well as mothers and grandmothers engaged in education. Thus, Oasis offers a place both at the service of the inhabitants of the neighborhood and a bridge between local realities and the international volunteers who participate in its activities. Since 2019, Oasis has expanded to another neighborhood in Bogotá, Ciudad Bolivar.

“Yes, Chile and Colombia are part of the same continent, Latin America,” says Caroline Jouan, general secretary of Fondacio. “But several thousand kilometers separate them. It takes six hours by plane to go from one to the other. They have many cultural and social differences . Focus on all the development and solidarity programs carried out by Fondacio in Chile and Colombia.

The Biblioteca Los Almendros was born in 2002, at the crossroads of the poorest, the businessmen of the Chilean “City”, built nearby, and the city of Santiago. The Biblioteca works for the social development of disadvantaged neighborhoods, culturally and educationally. She welcomes children, teenagers, adults and families, to whom she lends books. The Biblioteca also offers games and a green area.

“Children often don’t have many hours of lessons in the afternoon. They can therefore go there instead of being alone at home or in the street,” explains Caroline Jouan. Tutoring is offered.

The Biblioteca Los Almendros also works with the elderly in health centers. He brings them books and reads to them. She also organizes literary picnics and goes out to meet the population on a bicycle with a box of books. In 2020, nearly 1,000 people took part in its activities. Since 2016, this project has been carried out in partnership with the NGO Vidascopio. The team is made up of two permanent employees, foreign and local volunteers.

“A More Dignified Home” is a program for rebuilding and improving housing . It is developed in towns north of Santiago, such as La Pincoya, Conchalí or El Barrero. Here it is common to see poor families living in houses that do not meet the minimum requirements. They do not benefit from the traditional system of bank financing and receive no state aid. A Hogar Màs Digno builds and improves the houses of the pre-selected families, through a personalized architectural project. Before the pandemic, the program looked after an average of six to seven houses a year , with the help of young foreign volunteers.

This project was created for people with mental and/or physical disabilities. Chile has no structure to accommodate them. So they stay home and suffer from isolation. At the Centro, they can work in the horticultural field . They cultivate medicinal plants, take care of fruit trees and sell their products (such as herbal teas). “It allows them to leave their homes and have an occupation,” said Caroline Jouan. “The objective is to restore their dignity through work, which also allows them to have a social life.”

The Centro is located in the same place as the Biblioteca Los Almendros. Together, the two programs organize cross-curricular activities related to reading.

“Jesus the carpenter”: this project, created in 2012, concerns the inhabitants of disadvantaged neighborhoods near Huechuraba. It all started with a workshop to awaken their creative power. Then it expanded to entrepreneurship workshops . Participants learn to cook, comb and handle tools, but also to get inspired for their creations. In 2019, six entrepreneurship workshops were carried out, and among them: a basic hairdressing course, a sewing workshop with recycled clothes, a patchwork and weaving workshop

This solidarity project, created in 2006, helps the homeless . The idea is to share a coffee or a meal with them, to break the loneliness and to create links. The objective is also to try to get them out of the street by putting them in contact with social structures. Thus, Mi próximo created the first inclusive social network in Chile: a web application that allows everyone to report situations of need to the organizations concerned. The network lists institutions that work with people on the street. It aims to improve the general service in terms of distribution of food, material and health.

The Fondacio Training Institute (IFF) in Latin America was established in 2014, in Santiago. It offers intercultural and innovative training in ethical leadership and social project entrepreneurship. This training aims to empower young people , aged 20 to 30, to contribute to the social transformation of the continent. Indeed, Latin America and the Caribbean have developed strongly in a short time, but this has only benefited a few people, with the majority of the population remaining poor.

Iff America’s training allows young people to lead social projects to fight against these inequalities in their countries of origin. They are trained to discern their vocation, acquire skills, leadership and project management tools, to create projects that meet local needs or to integrate existing social structures.

Since its creation, IFF America has trained more than 90 students from a dozen Latin American countries. The Institute also organized personal and professional orientation workshops for more than 100 high school students in Santiago.

The educational project offers spaces for personal work, tutoring and games. In this way, children receive the necessary tools to think about their future. They are busy in the afternoons, when they are not in class, and not alone at home or on the street.

The project allows residents to care for and preserve the nature around them. In fact, they are part of a high Andean forest ecosystem. Oasis organizes different activities. Residents get involved in maintaining urban gardens, promoting the use of eco-friendly products, cleaning up rivers and turning burnt cooking oil into eco-friendly soaps.

Since 2013, Oasis has been involved in the construction of new prefabricated houses , in collaboration with the Catalina Muñoz Foundation . So how does it work? First, the families pay for the foundations of their house (sometimes with the help of a microloan). A donation funds the rest of the house, which is set up with the help of volunteers. The house is built in prefabricated form. It goes very quickly: a house is built in one day.

It is connected to electricity and water, has a kitchenette and a bathroom. The walls are covered with thermal and sound insulation (cellulose cotton) that the family can paint and customize. The goal is for the family to manage the project, discover its capacity for action, initiative and connection with others. Oasis accompanies families throughout the process: before, during and after the construction day.

The Young Lives Development Center (YLDC) program, already underway in several Asian countries, has been training disadvantaged young people in Ciudad Bolívar, south of Bogotá, since 2020. The YLDC project helps them acquire skills to empower them. The YLDC project targets vulnerable young people , aged 16 to 25. Ciudad Bolívar presents one of the most difficult conditions for young people to access higher education or work. During the confinement, the courses were given online.

“These young people have obtained their baccalaureate, but they lack the financial, and sometimes intellectual, means to continue their studies”, explains the general secretary of Fondacio, Caroline Jouan. “In Latin America, there is a huge gap between high school and university. The problem is that, without a university degree, young people are forced to work informally.”

The YLDC program offers four to six months of training . These include soft skills (English, IT, etc.), as well as self-awareness to determine which studies to choose, and capacity building. Students can work on the side or start their own business to earn money and pay for their studies. The YLDC in Colombia has partnered with universities to cut tuition fees in half.

Students can choose to pursue short studies, such as apprenticeships and professional degrees, or long studies, with a five-year program. Ten students completed the program in 2021.

First phase of the Fondacio Congress

After Africa, the first phase of the Fondacio Congress will begin tomorrow, April 2, in Latin America, in Colombia. It will open with a day of collective reflection on Saturday, at the Faculty of Theology of the Javeriana University of Bogotá, entitled: “Raising Our Gaze: Integral Ecology And Youth, The Big Challenge” .

Students, unemployed people, entrepreneurs, partners and members of the Fondacio community in Latin America will participate in the event. The goal is to hear and gather new thoughts and ideas from the periphery. This will help our Christian community to evolve and take another step forward.

The event will be broadcast on the YouTube channel of the Faculty of Theology of the Javeriana University of Bogotá :

Then, the Latin American delegates and several members of the Fondacio Council will work in groups. They will review the past four years since the last congress held in 2018 in the Philippines. During the first phase of the Congress, similar meetings will take place on each continent as part of the synodal process.

After Africa and Latin America, the first phase will take place in Versailles, France , from May 24-27, and in Asia , from June 18-22. The election of the President will take place in March 2023, before a meeting of all delegates in Africa in May 2023.

Below, listen to the testimony of three French volunteers in Latin America:

Walk with the poet living in the monde

CoVivre 2021 course: You can still register!

Gratiferia at L’Ermitage, a day of sharing.