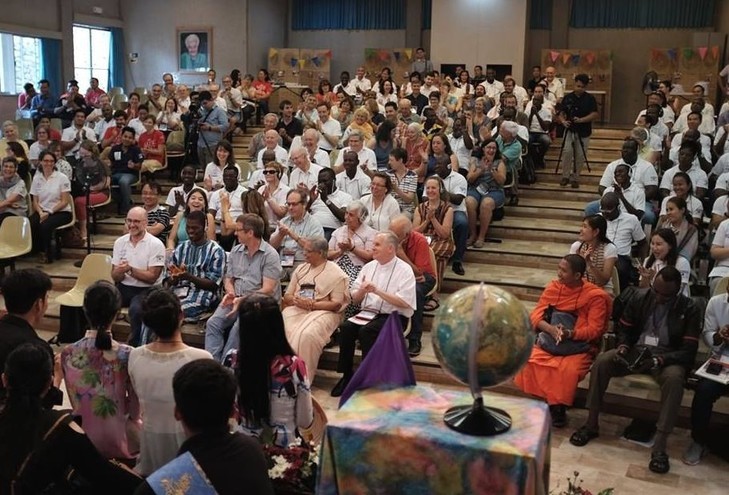 150 Fondacio delegates met in Tagaytay, Philippines, from May 7 to 11 to reflect on the future of this international movement, present in some twenty countries.

The 5th Fondacio Congress opened on Monday, May 7 and is being held until Sunday, May 11 at the Mariapolis Center, Tagaytay, Philippines. Its theme this year is “Called to be sparks in the heart of the world”, a world “marked by rapid changes and where Asia has become a center of gravity (demographic, economic, political, cultural and religious)”.
Every five years, a congress brings together all the delegates of this international movement founded in 1974 in the wave of charismatic communities – now present on four continents – to discern the priority orientations for the years to come and elect the president and the council for a new mandate.
Since May 1, approximately 85 delegates of 20 nationalities have immersed themselves in the local realities of several Asian countries where Fondacio is established: Myanmar, Laos, Vietnam, Malaysia, Philippines, before addressing for two days during a forum the challenges that missionaries face.

“Acculturation and gender balance in governance”
For the 150 delegates who then gathered in Tagaytay, the first challenge was to reflect on the particular mission of Fondacio – its “core business” – and to manage to define it simply. . “Our community aims for the integral development of the person, starting from the Gospel for a commitment in the world, with formation as a central dimension”, indicates upstream its president, François Prouteau.
Improving the governance of the movement is another issue of the conference. Fondacio is present in about twenty countries in the world: “Its future depends on greater inculturation and a better balance between men and women”, recognizes its president.
Finally, “the question of intercultural dialogue is essential today”, explains François Prouteau, whose predecessor was Chilean and settled in France during his mandate. “We think we can understand each other, but it is by being confronted with joint actions and collaborations that we understand how others think, how they work.”

Increased collaboration with priests and religious
The movement is also based on increased collaboration between priests, lay people and religious, as is the case in particular in Angers, with the Franciscan sisters of the Esvière site who have made buildings available for the Fondacio training institute. (IFF-Europe) focused on humanitarianism, solidarity and guidance. “The question of meaning and commitment is also a good entry point, with young people, but also with business leaders to whom we offer a journey of reflection on the meaning of their lives and spaces for healing. (In Lérins, Penboc’h)…” adds François Prouteau.

In addition to its training, Fondacio is also involved today in social and educational projects, particularly in Africa and Asia, in partnership with dioceses, movements and organizations: rural development projects, ecological projects, for patients with HIV, street children…
“There is a spirituality of benevolence to cultivate, not from the standards, but from our friendship with Jesus Christ, which does not make us afraid to go into situations on the periphery whatever they are”, explains Francois Prouteau.
Celine Hoyeau
Newscast

Conference: a path of inner and collective transformation