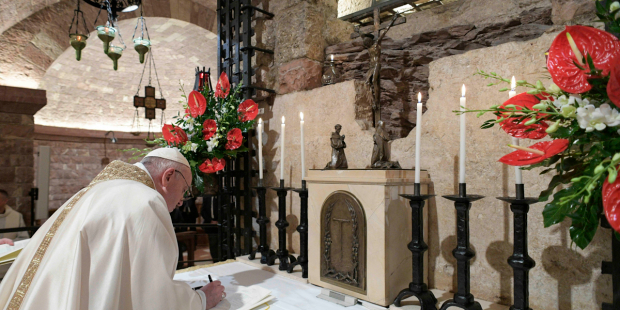 Feast of St Francis. The pope publishes a third encyclical Fratelli Tutti , in Italian, “all brothers”. It is a letter about human brotherhood and social friendship. In a situation of pandemic and global ecological crisis, it is more important than ever to learn to live together. Pope Francis says, “Without the fraternity Jesus has given us, our efforts for a more just world run out of steam and even the best projects risk becoming soulless structures.” .

Of course, placing fraternity in the Word of Jesus, “the first born of a multitude of brothers “(Letter to the Romans, 8, 29) opens an infinite horizon, in space and time, to the hollows of our lives, between us. Francis of Assisi was a living witness to this. Let us think of his meeting with the Sultan al-Malik al-Kāmal. In the Canticle of the Creatures, he extols the brotherhood of all creatures, in everything and up to”our sister death”. It shows the foundation of the common house. From this, he sketches the architecture, through systemic bonds of brotherhood.

One recognizes here the thought of Laudato Si’ of Pope Francis.

Laudato Si’ has become a reference text on ecology. Published five years ago, it is “ Act 1 of a call for a new civilization ” wrote Edgar Morin at the time. Since then, we have gone into “integral ecology” mode.

In this perspective, other acts have been taken which inspire the letter ” All brothers” published on the feast of Saint Francis, acts which concern religious plurality as an expression of fraternity. Religious plurality is a call, in multiplicity and difference, to “enter together, as a single family, in an ark that can furrow the stormy seas of the world: the ark of fraternity”. These words of the Pope were spoken in 2019, when the “Common Document on Human Brotherhood” was signed with Ahmad Al-Tayyib, the Grand Imam of Al-Azhar, a prestigious institution of Sunni Islam. Al-Azhar and the Catholic Church ask that ” this document become an object of research and reflection in all schools, universities and institutes” , in order to contribute to creating new generations who bring good and peace and defend everywhere the rights of the oppressed and the last”.

Like the dove, peace needs wings to take flight and be sustained.”the wings of education and justice “according to Pope Francis: “Fraternal coexistence is based on education, justice and development” (February 4, 2019, Speech by Pope Francis at the interreligious meeting in Abu Dhabi).

Fondacio in Guinea combines pastoral challenges and the culture of Artemisia.