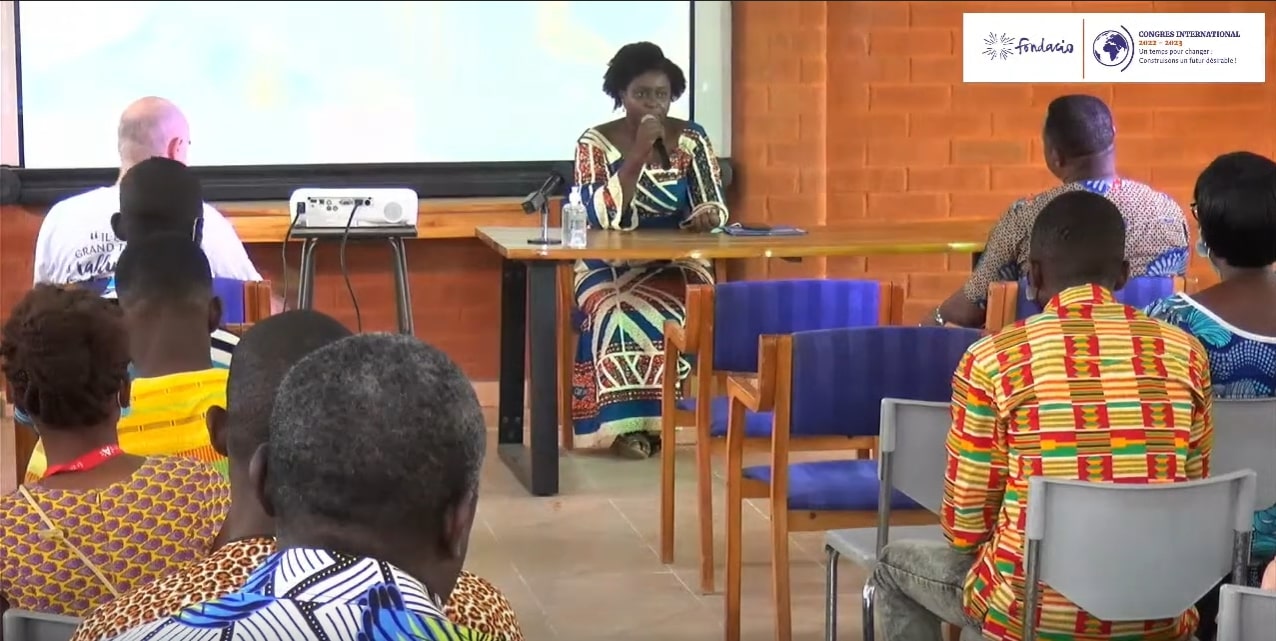 The first phase of the Fondacio Congress in Africa was held from February 26 to March 2, 2022, in Togo. Social entrepreneurship workers, teachers, Fondacio members and young entrepreneurs in agriculture shared their experience of the labor market. They told their stories, stories of passion, courage, difficulties, encounters and successes.

Until 2030, around 29 million young people will join the labor market in Africa each year. In 2022, the continent will have a total population of 1.4 billion. It is expected to reach nearly 1.7 billion by 2030, according to the United Nations. “But the economy is not going at the same pace”, underlines Christian T. Helim, a participant in the forum who spoke about financing business creation in Africa . “This is causing a serious unemployment problem.”

Another challenge is “the lack of sustainable and decent jobs”, according to Gabriel Amouzou, Fondacio’s Coordinator in Central Africa and member of the Fondacio Council. “Young Africans are confused. They lack benchmarks and support in promising sectors, such as agriculture. Fondacio in Africa quickly understood the challenge. entrepreneurial training of young people . »

Accompany the agents of change

The Fondacio Training Institute (IFF) in Africa and Sichem opened training in agricultural entrepreneurship in January 2016. “Agriculture is very dynamic. It is the engine of economic development in most Third World countries,” explains Ferdinand Adindjita, director of IFF Africa. “Our goal is to professionalize this sector . Indeed, the development of rural areas makes it possible to fight against unemployment. We train real agents of change who create viable social micro-enterprises.”

In six years, 127 young people have been trained to become agricultural technicians or entrepreneurs (internships of 9 and 18 months). 382 took reinforcement modules and courses to reorient themselves. The integration rate is 60%. According to Gabriel Amouzou, “the positive impact for them is considerable. They radiate in their territories”, whether it is the production of tropical strawberries, mushrooms, bissap wine, juice, the breeding of chickens or the sale of agricultural material.

From idea to creation

“Our journey has three dimensions,” says Ferdinand Adindjita. First, the human dimension . “The young people who come here are confused. They don’t know who they are, what they want. We work together to develop their human capital. We identify their skills and connect them to a job in agriculture. sectors: plant production (market gardening, nurseries, artemisia); agri-food (fruits, vegetables); animal production (rabbits, chickens); agroecological inputs (compost, digestate).

Second, the agro- pastoral dimension . It provides tools for developing an economic project, with “30% theory and 70% practice, in incubation mode”. Third, the entrepreneurial dimension . It provides tools to “promote sustainable socio-economic development that respects the environment. The course allows students to move from the idea to the creation of an agricultural business. They draw up the operating account, benefit from ‘mentoring and start networking’.

“To find meaning in my life”

Five entrepreneurs shared their field experiences during the forum. Among them is Christine Colani , 32. Trained at IFF Afrique, she is now director of Germe-Afrique in Togo. His company produces mushrooms and tropical strawberries.

“My dream was to pass the competition to become a magistrate. After my diploma, the competition was blocked. I waited three years, but nothing. The judicial market is saturated in Togo. So I decided to reorient myself and find meaning in my life. That’s how I got into entrepreneurship. I first took short courses in market gardening. Then I looked for a full course. That’s when I came to IFF Africa for a year. I had never done farming in my life!”

“After the training, I went into organic production, food processing and teaching. Today, I have three full-time employees and ten part-time employees . We encountered a number of difficulties. Market gardening is a growing sector, but there are many challenges with few resources. This year and last we had drought. We lost nearly 2 hectares of production because we had no wells on the site. It’s a very hard blow. We are going to benefit from a drilling grant which is currently under construction.”

Christine Kolani concludes: “It’s not easy to go from one dream to another. But there are other opportunities to earn a living and find meaning in it.

Charles Tsevi, a young agricultural entrepreneur, was a student at IFF Africa in 2019. “There were ups and downs,” he recalls. “I like to do things at my own pace. I had a hard time getting into Shechem’s rhythm. Luckily, thanks to the coaches, everything went well.” After the training, Charles Tsevi returned home to Danyi, north of Lomé. There he started a production of organic mugwort, green beans and green peppers . “It wasn’t easy because of the locusts. They ate all my beans and peppers. So we put nets in. That allowed me to make lettuce last November and December.”

Since 2020, he has been processing fresh avocados into dried avocados, which are exported to France. The young man also took beekeeping training. “My father is the president of the beekeepers of Togo,” he explains. Charles Tsevi plants melliferous trees, whose nectar is collected by bees to make honey. ” Thereby, we are helping to solve the climate problem. Beekeeping requires us to protect our hives and, therefore, the environment around them. Thus, we protect classified forests or public spaces where we install our hives. We also go to the villages where they have cut down a lot of trees to raise awareness among the population. »

After the forum, about thirty African delegates and several members of the Fondacio Council worked in groups. They reviewed the past four years since the last Congress in the Philippines in 2018.

For the first time, the Fondacio Congress will take place in three phases. The first will be held on four continents, from February to June 2022. After Lomé, it will take place in Bogota, Colombia, from April 2 to 6 . The theme that will be addressed during the Latin American forum will be: “Engaging young people in integral ecology and social justice”.

Watch testimonials from entrepreneurs in Africa (first video, above) and Ferdinand Adindjita, Director of IFF Africa (second video, below).

“The Squares of Taizé” – Arti Biscuits