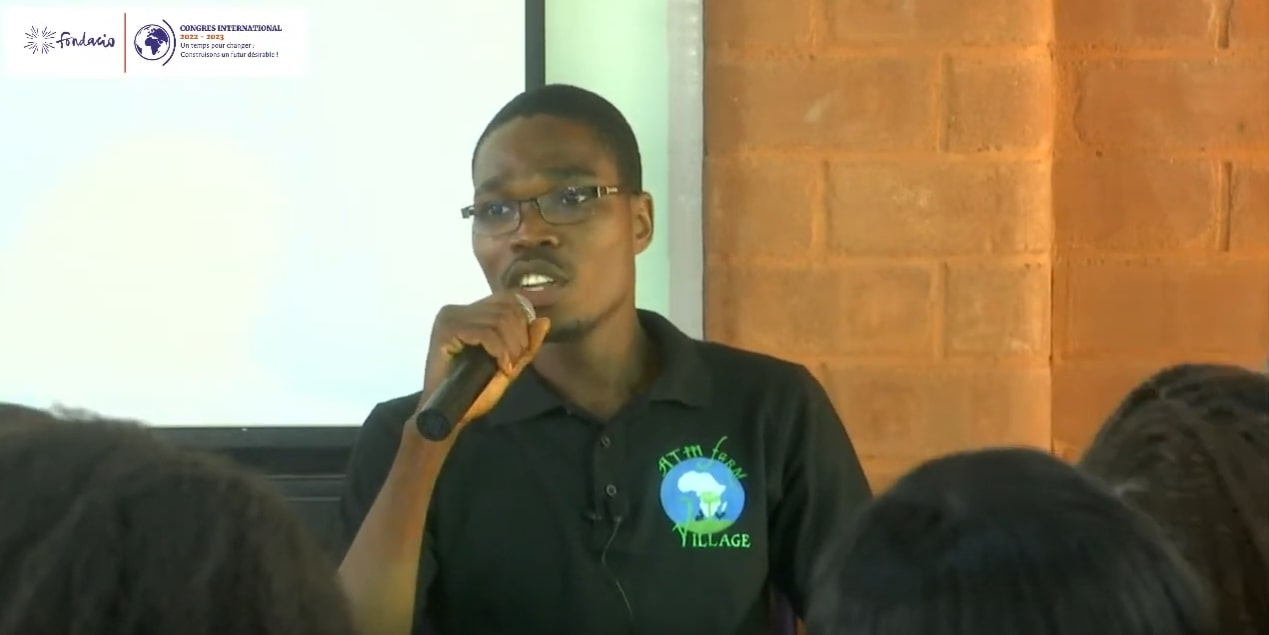 Business leaders, teachers and Fondacio members spoke at the opening forum of the Fondacio in Africa Congress, on February 26 and 27, 2022. They have proven that with courage, commitment, hard work and the help of the community, anything is possible, even with little means.

“To become an entrepreneur, you have to overcome fear and work, work, work,” said Professor Koffigan Agbati, a teacher and researcher at the universities of Togo, during his lecture at the opening forum of the Fondacio Congress in Africa, at the end of February (see below).

Ferdinand Adindjita, Director of the Fondacio Training Institute (IFF) in Africa, also stressed: “Young people need to change their attitude. This is the biggest challenge. Often they claim that they lack the money to start their business. But they have to work first, because it is work that brings in money! Boldness, perseverance, patience, dynamism and loyalty are the values to be built in young people.

The career of Armel Atchou, a student at IFF Africa in 2020, tells it well. The young man estimated that he needed 600,000 CFA francs (just over €3000) to start his business, renting a plot of 2m30,000 and irrigating it. He must soon revise his ambitions downwards for lack of funds. “I sold charcoal to pay for seeds and pots of artemisia,” he told the forum. “Then someone gave me 45 XNUMX CFA francs in advance for the works (XNUMX €). That’s how I started, step by step. »

Armel Atchou started his business, Farm Village Cash Machine , last year. He cultivates fruit trees (mango, lemon, guava and coconut). It employs twelve agricultural engineers. Its turnover is 2.3 million CFA francs (€3,500). “We will start planting banana trees this year,” he says. “We are also going to introduce young people to agriculture, thanks to a patron who offered us a plot of 25 hectares. It’s not ideal, but where we are is better than where we started. I could have resigned, but I showed courage and selflessness . It’s courage that counts. »

Until 2030, about 29 million young people will enter the labor market in Africa each year. The continent holds the record for the highest proportion of adults starting or running a new business in the world. “World Bank surveys show that small businesses, with less than five years of existence, are the biggest contributors to the creation of new jobs,” explains Christian T. Helim, speaker at the forum. However, they are facing funding issues . “Some countries, like Togo, are putting in place mechanisms to help young people get started.

But for Ferdinand Adindjita, we must go further: “Parents, politicians and financial institutions must change their mindset. Training and integrating young people into society and the labor market requires all of us to be involved. ” According to him, the first source of financing resides in the community . “We encourage young people to come together and build a common vision . Coming together is a start, keeping together is improvement, working together ensures success. Of course, this must be based on human values: loyalty, trust and living together.

After 17 years of administrative management, Eusèbe Zinsouga, manager of Fondacio in Benin , decides to leave his job and create his own company, Amocles Plus, in waste management and urban sanitation. He was aware of the difficulties companies face in the beginning. He first contacted business leaders to set up a commercial synergy . She gave birth to Synergie Thez two years ago. It allows his company and two others to share their activities and their address books.

“We are stronger together” says Eusèbe Zinsouga. “You just have to find people who share the same human and moral values.” Thus, in the opinion of the 47-year-old man, “starting your business with little money is a state of mind. You have to dare and move forward. If you make a mistake along the way, it doesn’t matter, you’ll try again. Don’t be afraid to work in synergy. Today, Eusèbe Zinsouga employs more than 135 permanent staff for sanitation work and 20 contract workers. “We are proud to contribute to cleaning cities in Benin.”

Next forum in Bogota

Concluding the forum, François Prouteau, President of Fondacio , said: “We are entrepreneurs together. We need each other to be inspired and encouraged in our entrepreneurial abilities.” At the end of the forum, thirty African delegates and several members of the Board of Fondacio reviewed the last four years since the last Congress.

The first phase of the Fondacio Congress will be held on four continents, from February to June 2022. After Lomé, it will take place in Bogota, Colombia, from April 2 to 6 . The theme that will be addressed during the Latin American forum will be: “Engaging young people in integral ecology and social justice”.

Watch testimonials from entrepreneurs in Africa (above) and Professor Koffigan Agbati’s lecture (below).