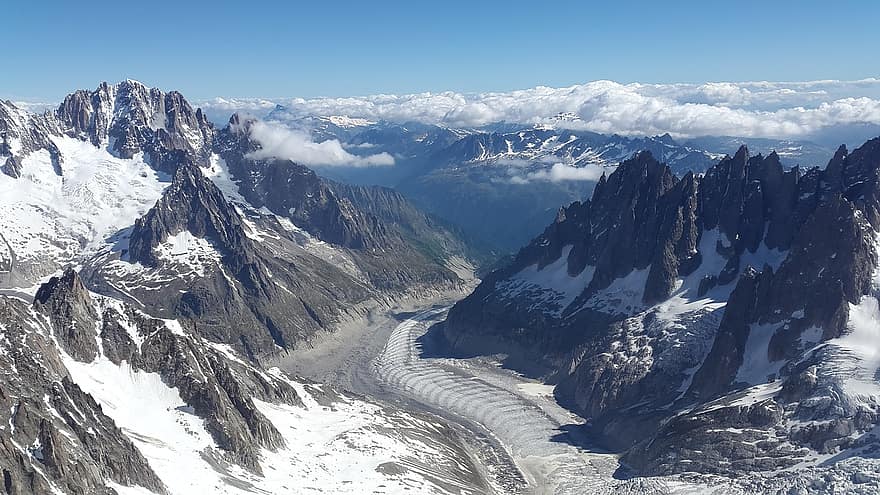 Summer, with the heat, is the occasion for beautiful walks, along the sea, in the countryside or in the mountains. In the Alps, at the Col du Mont St Bernard, the landscape is grandiose, wild and magnificent. I went there a few months ago. It is a paradise for hiking, meditation and physical exercise. At first glance, a phenomenon arouses your attention: you can see that over the years, multi-millennial glaciers have disappeared. Such an observation on climate change corroborates the data provided by the oldest meteorological station in the Alps. It is located at the Grand-Saint-Bernard hospice at an altitude of more than 2400 m. In 150 years, the analysis of daily temperature readings scrupulously collected by measuring devices indicates an average rise of around 2.5°C. A map produced by Météo Suisse illustrates such an evolution across the country, since 1864, with an increasing gradation of red from 0° to 2.5°C. The entire recent period of the last seven years obviously reflects global warming in an established and lasting way, in the red zone.

The red zones linked to the evolution of the Covid are topical. But we must not lose sight of the red zones of global warming, which are probably even more lasting, which are affecting our regions, in Switzerland, France and elsewhere in the world. In recent days, smoke from the California forest fires has tinted the bay and the city of San Francisco orange-red in broad daylight. “While many aspects of our lives have been disrupted in 2020, climate change has continued unabated” underlines the report of the World Meteorological Organization (WMO) published by the UN last Wednesday. There have certainly been reductions in carbon dioxide emissions in 2020, but the impact is very low in the atmosphere, and CO2 concentrations “have never been so high for 3 million years” adds WMO.

Because of climate inertia, it is possible that the actions we take today will not have lasting effects of stabilizing climate increases not before 2030, at best. For the time being, we perceive the effects of such warming, in all seasons of our life in Anjou and elsewhere, as “over the entire biosphere, from the top of the mountains to the depths of the ocean, resulting in an acceleration of sea level rise, with cascading effects for ecosystems and human security” according to the rapporteurs of the IPCC, the Intergovernmental Panel on Climate Change (IPCC) which participated in the report. The UN calls for “urgent and concerted action by all countries and all sectors”. Its director general, Antonio Guterres, urges states to “act together in the face of the climate threat, which is much more serious than the pandemic itself”. The UN also calls for a change in our consumption patterns, combined with new technological solutions for carbon capture and storage (Les Échos, Sept. 10, 2020). There is still time to act.

UHMD responds to the call of the Misericordia Foundation