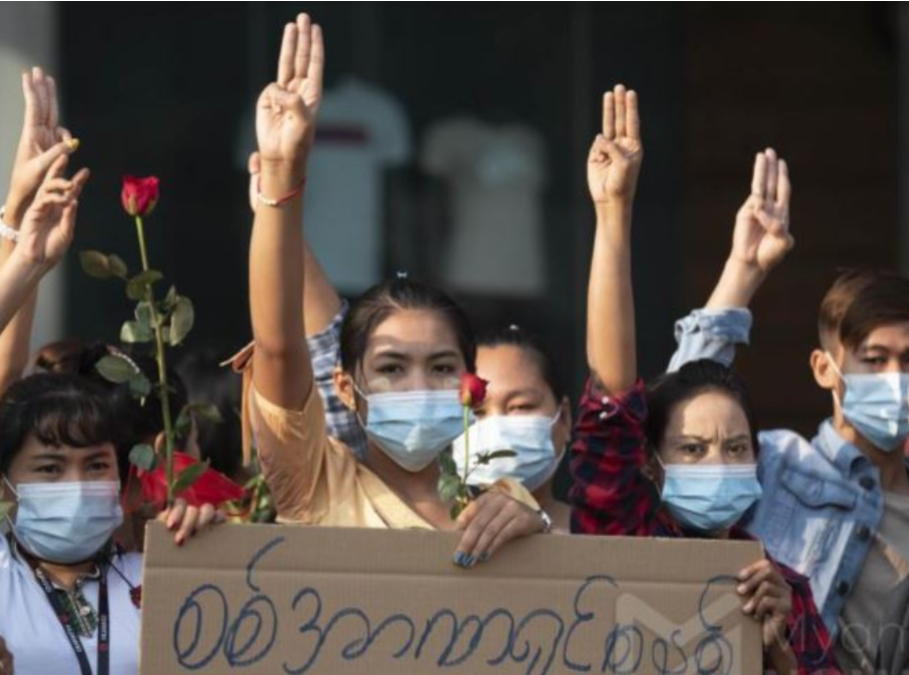 Almost three months after the military coup in Myanmar, the situation continues to be dramatic and under high tension.

The military junta under General Min has killed at least 745 people and made thousands of arrests since the February 1 putsch. One wonders where the Burmese resistance fighters still find this amazing energy that drives them! Peaceful protests continue, day and night. In the street, against the army, it’s the clay pot against the iron pot. A young resistance fighter says:How can we compete with their weapons? By fighting with our intelligence”.But it is at the risk of their lives. 82 civilians were massacred on April 10 by the police and the army with the use of heavy weapons.

Everywhere it is still and always the non-violent resistance which prevails, except in the territories of the minorities where one envisages coups de force supported by the ethnic armies. A “military” operation against the 500,000 over-equipped Burmese army would undoubtedly be suicidal, with the risk of a generalized civil war.

How do people continue to live?

The people are on their knees, the economy suffocated, on the verge of collapse. Most businesses are shut down. These are thousands of women and men – mostly from the most disadvantaged strata of rural areas – who have returned to their countryside, with empty pockets, and now unemployed and without income.

To alleviate the growing precariousness, the resistance movement organized, on a large scale and in many towns and rural areas, a very important network of mutual aid. Two to three times a week, in a place in the town or village, a solidarity market is held where everyone can come and stock up for free while others bring what they have and which they can do without. In some neighborhoods we have even tinkered with small carts and scooters filled with food that circulate every day in the streets and alleys. Young people push them, shouting: “If you need, take! If you can, donate!”

Does the meeting of the Association of Southeast Asian Nations (ASEAN) last Saturday in Jakarta open a new stage?

Certainly, but in what sense? Urgently requested by the UN, the ASEAN meeting on Saturday achieved a consensus to end the violence, and start a constructive dialogue between all parties with the help of a special envoy from the ‘ASEAN to facilitate dialogue with a visit by this envoy to Myanmar. However, the Burmese putschist General Min did not respond explicitly to requests to end the massacre of civilian demonstrators. One can also wonder about the fact that the invitation of General Min to such an official meeting does not constitute, in a way, a form of recognition of the putschist regime on the international scene.

We can join the prayer by ZOOM every Wednesday organized by the young people of Fondacio in Myanmar. Link on our site.

Listen to the podcast on RCF here

Agents of change: the first conference.

Living and Facing Crises in Communities and Organisations