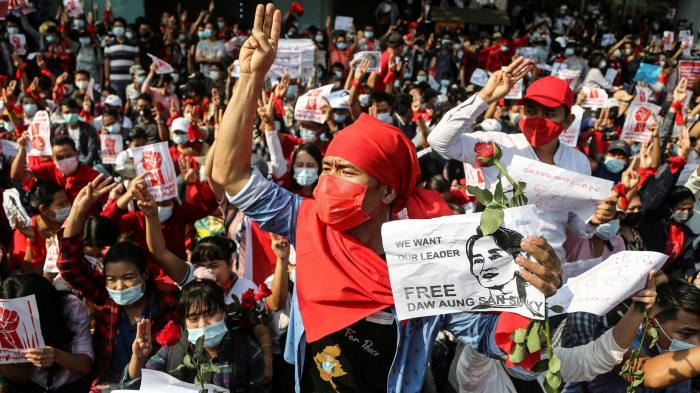 The news of recent weeks has highlighted the fragility of democracies. Yes, of the oldest democracies like in the United States, like the one that was emerging in Burma and whose military coup on February 1 sounded the death knell.

In the United States, the last presidential elections have shown the importance of the fact that a leader must be accountable to the people and that the people, in a democracy, assert their sovereignty at the time of the vote. But by calling for a march on the Capitol on January 6, the outgoing president shook democratic institutions. His supporters’ assault on Capitol Hill brings to light Trump’s worst legacy: “by his violence, the triviality of his remarks and, often of his acts, the outgoing president gave right of citizenship to instincts that a good institutional functioning is precisely intended to contain and channel, “ underlines the journalist Guillaume Goubert (editorial of La Croix of January 20, 2021, the day of the inauguration of Joe Biden).

But for the benefit of this tragic ordeal, we can emphasize the fact that the institutions, equipped with powerful safeguards, have held up well.

Yes, it’s true. In addition, Donald Trump’s Twitter account with its 88 million followers was permanently shut down, three days after the Capitol riots, due to Trump’s “severe and repeated violations” of the digital platform: the President of the States United made its political announcements there, fulminated against the media and insulted its adversaries on a daily basis. Six other digital platforms have, after Twitter, decided to exclude Donald Trump. Clearly, these activities and positions taken by the digital giants highlight their power over public debate and democracy. She stresses the need for a more in-depth political debate on freedom of expression and respect for others on the internet and social networks.

This brings us to Burma. Since the military coup that overthrew the civilian government of Aung San Suu Kyi on February 1, the army has repeatedly ordered the blocking of access to Twitter and Facebook, the gateway to the internet for millions of Burmese, in order to silence the growing protest in the country. Despite ongoing arrests and internet shutdowns, thousands of demonstrators marched through the streets of Yangon this weekend, raising three fingers, as in the fiction film Hunger Games, to signify their act of resistance. In the images posted yesterday by AFP on Twitter, we see the inhabitants of Rangoon who, like every evening at 8 a.m., bang on pots and honk their horns. They reject the coup d’etat and the military dictatorship. It’s ” unimaginable and unbelievable to me in this 21st century ,” said a young protester. We can only express our support for the Burmese people and pray for a return, as soon as possible, to democracy in this country.

Fondacio at the IV Forum of Catholic-Inspired Organizations in Rome

Phase 1 of the Congress in Europe: let’s rock!